10.1. Set channel output values and working with the OCP

This is a SCPI commands sequence that sets a voltage, current, and the over-current protection (OCP) on the channel two:

If software simulator is used, connection of the load can be also simulated:

The following command sequence could be used to test channel mode with load previously defined and after the load impedance is lowered enough that output current reach programmed value. The OCP has to be disabled because previously defined 100 ms delay does not give us enough time to execute the whole sequence for testing channel mode and output voltage and current values:

The OCP will “trip” when output current reach programmed value and channel stay in the CC mode for more then programmed OCP delay time. To test that with e.g. the software simulator we’ll disable channel output first, enable OCP and when change channel output back to enabled state:

The channel output state cannot be changed to enabled until any of protection is active. We have to clear protection first. If the same load that caused the first protection trip is still connected the channel output will be disabled immediately after the protection programmed delay time expired. Therefore we also have to disconnect load or disable protection. The later method will be used in the command sequence that follows:

For optimum calibration results the following condition are recommended:

The following command sequence could be used to store current set of parameters to the profile location 4 in the non-volatile memory:

We can now turn the BB3 off (when it enters the standby mode) turn it on again and check some of the programmed parameters:

We can automate above mentioned process that channel profile parameters stored in non-volatile memory are using on power up. First we’ll check what is a current status of automatic recall and what profile will be used in the case of automatic recall:

10.4. Get identification info and self-test results

The BB3’s identification information could be beneficial when more then one instrument are controlled. Additionally in the following example information about self-test will be queried:

The self-test could be performed even when the BB3 is in the standby mode. We’ll first switch the BB3 into the standby mode. At the end of this example we are using additional diagnostic command that allows us to query information about channel’s ADC measurements.

The BB3 comes with simple “arbitary waveform generator” functionality that can be accomplished using the LIST commands. The following example changes in the loop output voltage between five output values each half a second long while current is set to 3 A.

Resulting output voltage and current waveform is shown on the picture below. 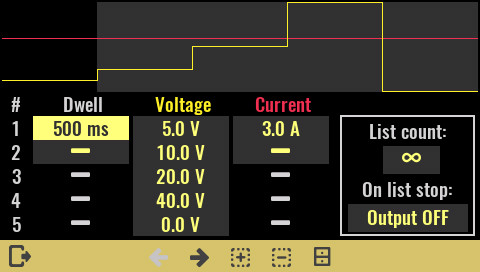 Data logging of multiple values can also be done using SCPI commands. The recorded values can be acquired from various BB3 resources (e.g. power channel output values, analog or digital inputs on MIO168 module, etc.), but can also be collected from other sources and programmatically added to a log file that can later be viewed on the device itself or transferred to EEZ Studio on a computer.

Resulting data log that includes two recordings is shown on the picture below. 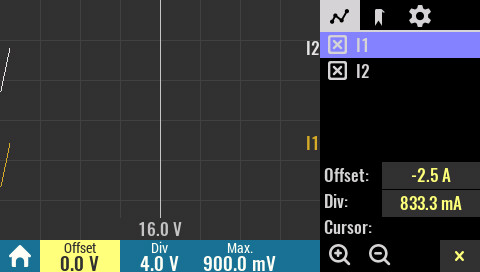 The DCP405 power module is fast enough to emulate a full rectified AC power source and thus can replace traditional AC mains transformer and bridge rectifier. The advantage is that the voltage and current can be changed in real time, which speeds up and simplifies testing.

Resulting output voltage and current waveform is shown on the picture below. 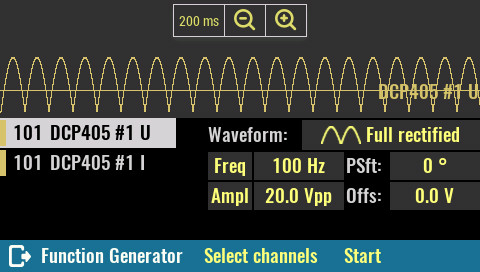