The Subsystems section is used to define SCPI commands (organized into subsystems), searchable help section and SCPI commands and queries syntax used by ESW to assemble a valid SCPI command ready for execution. This chapter is organized in the following sections:

SCPI commands (and queries) that can be used with instrument can be added in two ways: from specially formatted HTML help files or manually.

For example, we can start with only one HTML file that has to be located in SCPI documentation folder (Fig. 2).

The Refresh action in this example detected and reported 16 new SCPI commands as shown in Fig. 3. where we can decide what to do with reported commands: we can select one or more of them to include them into project or reject this action if reported commands and their number is not as we expected (i.e. not in accordance with created HTML files). 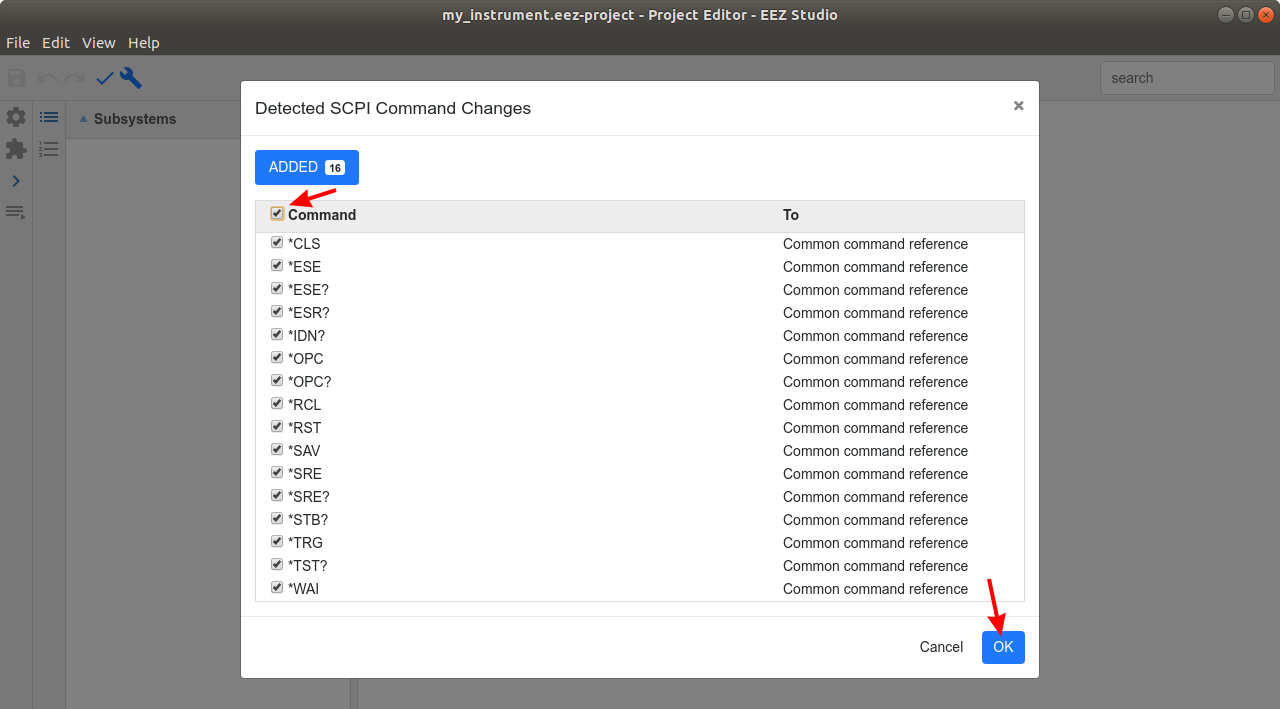 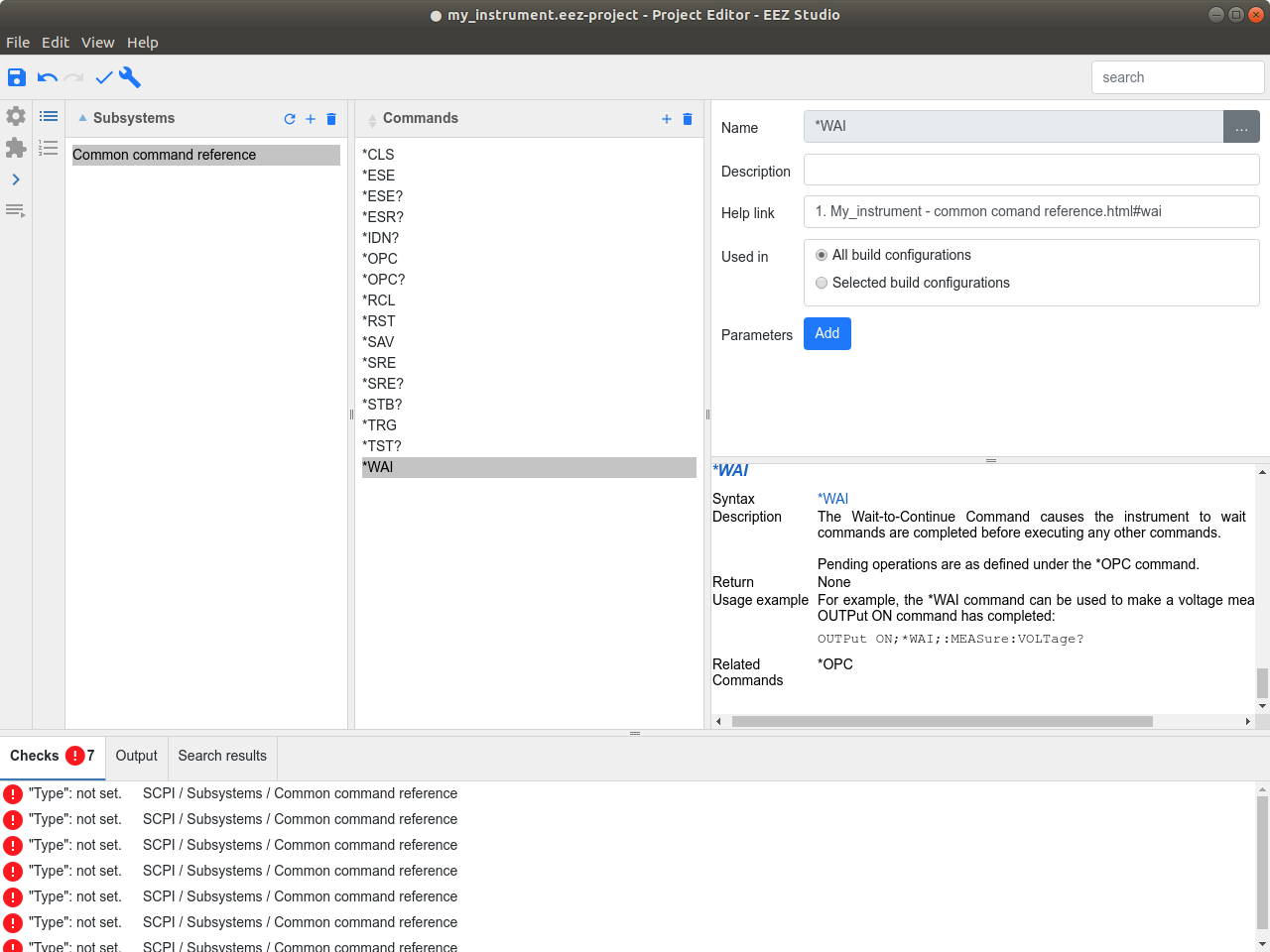 The selected SCPI command or query details are displayed on the right as follows:

If HTML help file is structured properly as e.g. for the Generic SCPI instrument that is available on the GitHub repository, the ESP will also include command parameters into the project. Still, the SCPI query will require some attention, since its response type cannot be directly parsed. Therefore ESP will report some errors (seven in our case as shown in Fig. 4.).

The second method for adding SCPI commands and queries is by adding it manually. A new SCPI subsystem can be created by choosing Add item option (+ sign) from Subsystems section as shown in Fig. 5.

Properties of the newly added command is displayed on the right side and can be modified as shown on Fig. 7.

In our example command will require three parameters, that can be added sequentially one by one using the Add button. The third parameter is marked as optional (Fig. 8).

The question mark (?) at the end of the name make difference between SCPI query and command. Therefore if we’d like to add a SCPI query instead of command, the name has to end with question mark. For example, APPLy? is a query form of the APPLy command. When SCPI query is defined a new section will appear as shown on Fig. 9.

Finally, a word of caution when project contains SCPI commands and queries that were manually added. Every time when Refresh with content from HTML help folder option (Fig. 1.) is selected it will report that “deleted” commands are found. Such commands does not exists in any of HTML help files, hence they are proclaimed as deleted (the ESP presume that they were once existed and imported into project but afterward removed from the latest HTML files version). In this case, commands listed under Deleted tab can be simply ignored (not checked).

The SCPI parameters could be of one or more types. The SCPI command parameter type can be specified using the selection shown on Fig. 11.

Special attention require Discrete parameter types. Many SCPI commands and queries works with predefined values that can be used to address instrument resources (e.g. channels, modules), pre-installed functionalities or that which has to be additionally obtained and activated, etc. For example, discrete values can be channel names like CH1, CH2, CH3 or wave shapes like SINusoid, SQUare, RAMP, PULSe, NOISe, etc. and they don’t necessarily have numeric equivalents. Therefore we cannot use Numeric type, and from other side String type could offer too much freedom and in that case IEXT cannot provide “hints” i.e. list of values that instrument only can accept with accompanied command.

List of allowed (discrete) values can be defined using the enumerations (Fig. 13). Project can contain unlimited number of enumerations with possibility that one or more discrete values is repeated in two or more enumerations.

Once defined, the enumeration will become available in the list of Discrete types can be used with multiple SCPI commands and queried. For example, we can use it to specify allowed values for channel parameter of previously created APPLy? query or APPLy command (Fig. 17).

When IEXT is successfully built and installed we can see how above mentioned channel parameter of Discrete type looks in SCPI command selection (Fig. 18). It will offer a list of discrete values that can be used to accurately select one of the existing channel. 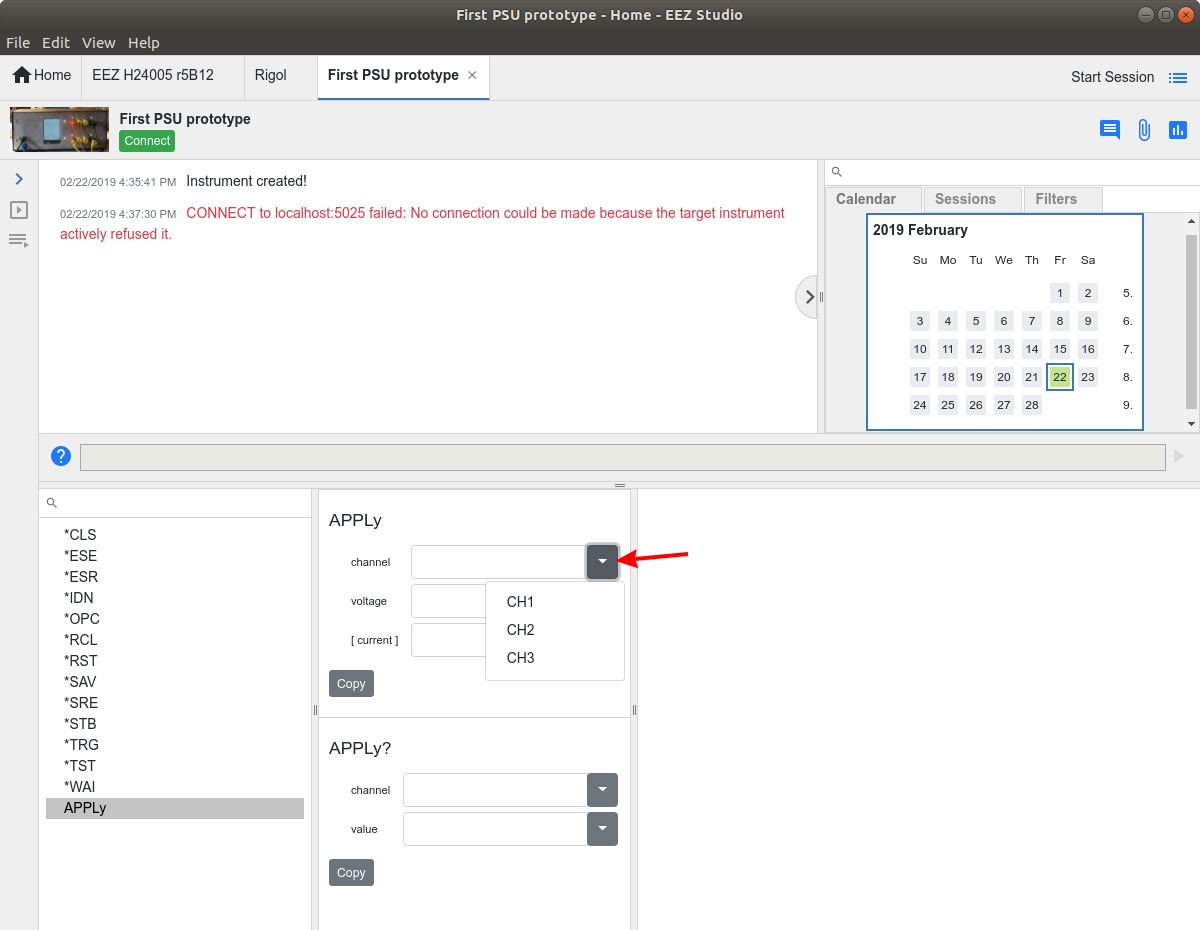