EEZ Studio v0.9.87 release represents the final milestone (M5) of the first phase of implementation of EEZ flow technology for visual programming of the T&M solution for which NLnet (NGI0 PET fund) was the main sponsor. This milestone expands the capabilities of the visual debugger introduced in M4 with flow support that runs directly on EEZ BB3 T&M chassis. This version also includes a series of bug fixes and improvements in the flow editor and debugger.

Adding a visual debugger will make it easier to create customized applications for EEZ BB3. Debugger functionality requires the installation of the new version of the firmware (v1.8-Alpha) available on GitHub.

With this version EEZ Studio becomes a powerful embedded GUI development tool for creating new applications quickly and intuitively. EEZ BB3 with existing support for MicroPython, Node-RED and MQTT by getting this distinctive feature become an even more attractive choice for automation of testing and measurement, and to our knowledge represents a unique solution in the market.

As an example of customizing the EEZ BB3 GUI, the DC power project was released. One of the project GUI pages is shown in Fig. 1. As can be seen the layout itself and the accompanying logic can be displayed in the same place for easier editing and flow monitoring. 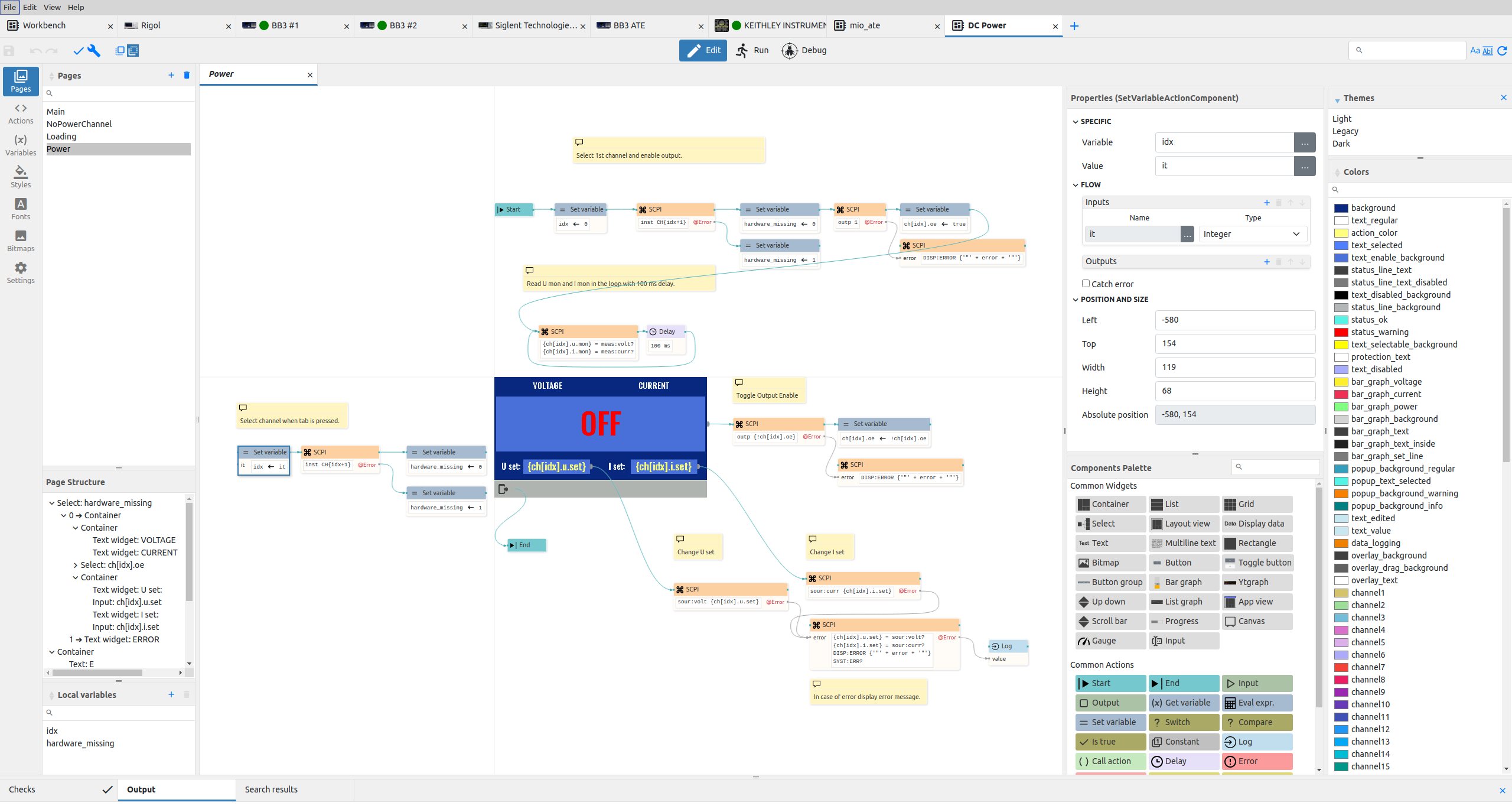 Launching the EEZ BB3 application leads to the transfer of file (in .app format) to the SD card (in the Scripts folder, as shown in Fig. 2) from where the application can be launched later without the need for EEZ Studio to be started and connected to EEZ BB3. An example of the layout of a GUI for a single channel in CC (constant current) mode is shown in Fig. 3. The example uses a gauge component that does not normally exist in EEZ BB3 firmware. 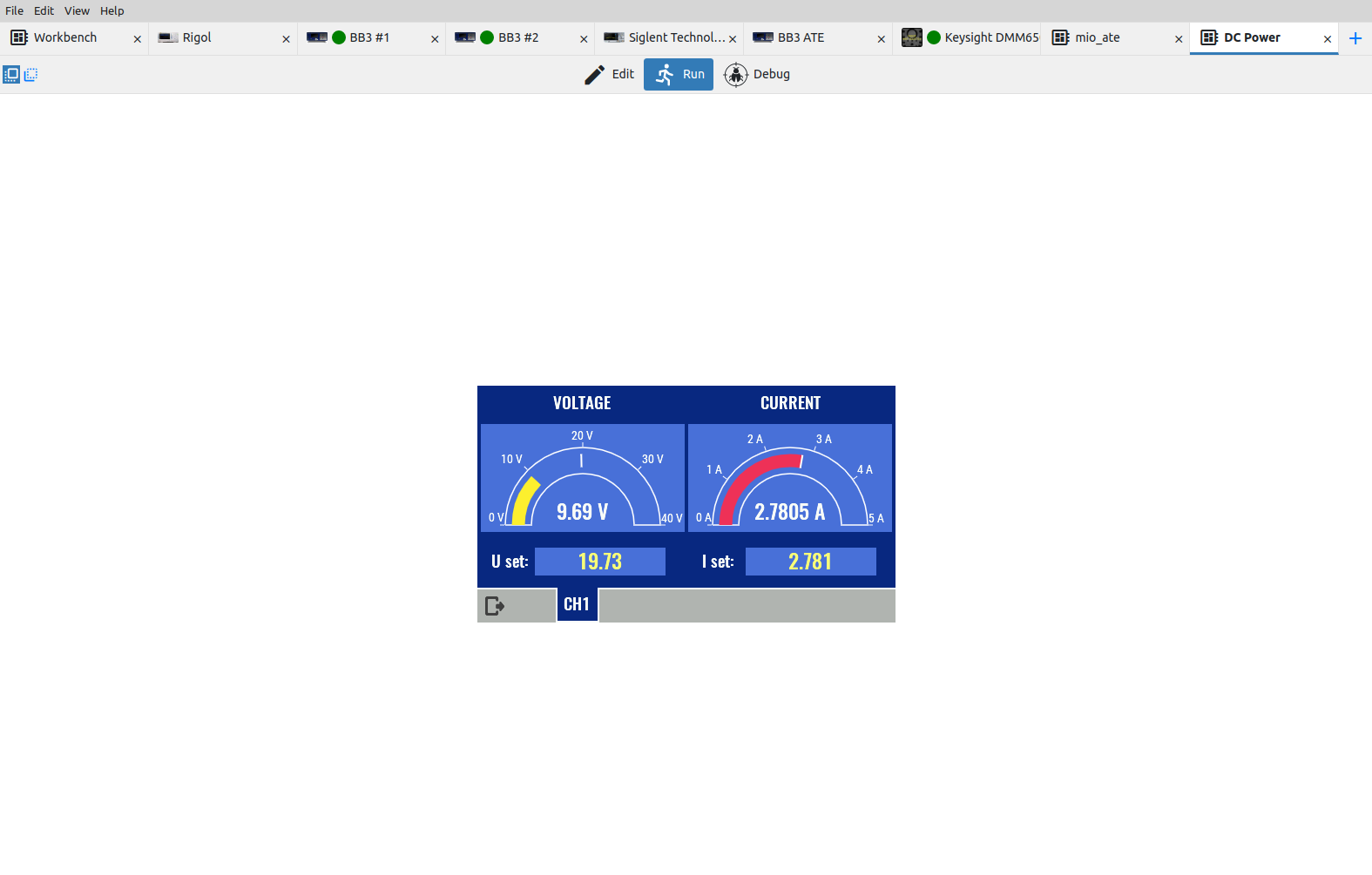 When EEZ Studio is in debug mode, it is possible to execute the application step by step (Fig. 5) as well as set breakpoints. Debug mode also allows you to view queue, watch variables, breakpoints, active flows and log of all executed blocks/components with the ability to filter executed SCPI commands (blue marked) and errors (red marked). 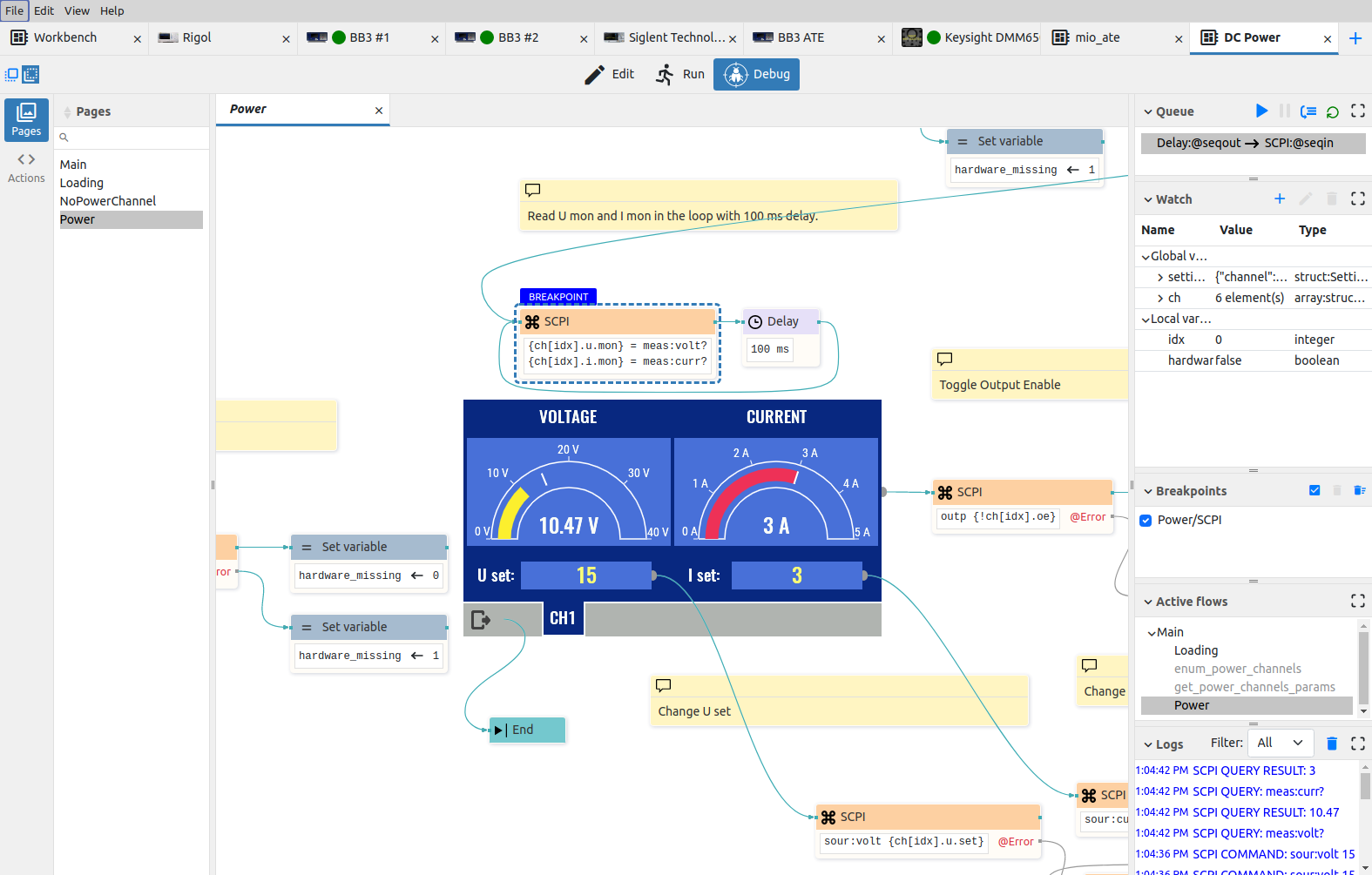 EEZ Studio currently supports two targets for executing flows: the personal computer dashboard and the EEZ BB3, which are not equally supported due to technological limitations or because we have not yet had time to support them. The differences are best seen on the components palette which depending on which target is selected looks like in Fig. 6 and Fig. 7.

Another important difference is that for EEZ BB3 it is possible to define different component styles, while for dashboard they can currently only be defined via CSS (which gives more options, but is also more complex to define).

Our intention is certainly to harmonize the functionality of these two targets as much as possible in the near future.

The first phase made it possible to add basic EEZ Flow functionality to the cross-platform open source EEZ Studio. With that, the job is nowhere near done. Numerous new ideas have emerged, as well as suggestions from community members on additional functionalities and improvements.

Development will continue according to our capabilities, and below is a non-binding roadmap of what we would like to do in the near future.

If you want to support our work, your donations are welcome via Liberapay, and you can follow our further activities here, on Twitter, GitHub and our Discord server.