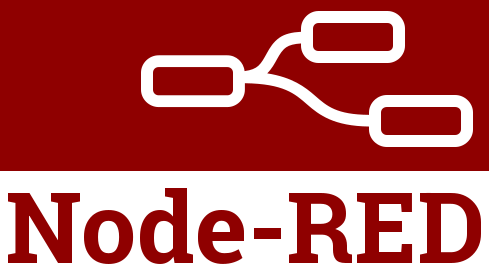 Node-RED is a free and open source flow based programming tool for event-driven applications that provides a browser-based editor that makes it easy to wire together program flows using the wide range of predefined nodes that perform a specific action.

The integration of EEZ BB3 with Node-RED allows the creation of complex automation tasks quickly and without the need for common procedural programming. This makes this solution suitable for use in ATE environments for benchtop development, lab testing automation or manufacturing floor quality assurance.

An additional advantage of this combination is that it is end-to-end open source and cross-platform which facilitates deployment in different environments and facilitates the sharing of test procedures.

This chapter will describe how to install Node-RED and a simple flow example to automate relay contact testing. The flow used is available at https://github.com/eez-open/node-red-relay-loop-test

Details of the installation can be found on the official Node-RED website at the following link https://nodered.org/docs/getting-started/local

In short, the installation can be summarized in the following few steps:

Node-RED is also started from the terminal (command prompt). To start enter:

Note that the terminal in which you started Node-RED must be active at all times for normal operation. If you want to exit, first press Ctrl + C and wait for the prompt to appear. You can then close the terminal application or run Node-RED again.

Welcome text similar to the one shown below will appear on Linux: 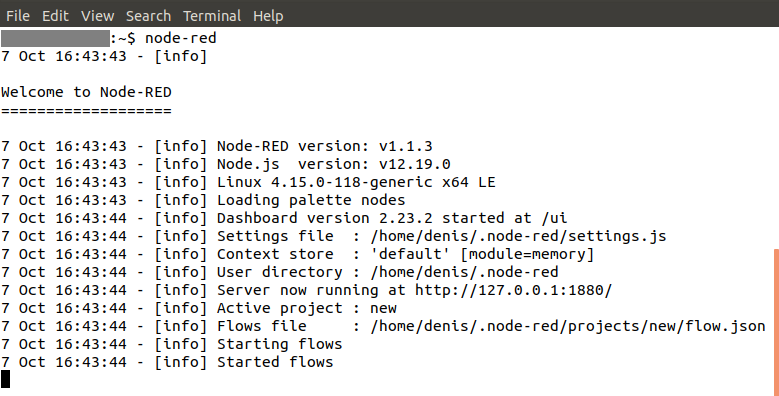 Node-RED will also display the log of its activities in the terminal. The log output at the beginning provides information such as:

The first time you run node-RED on Windows, a firewall warning will appear. Confirm default settings by selecting the Allow access option. 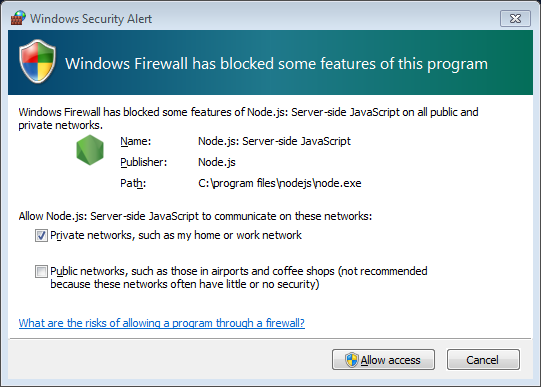 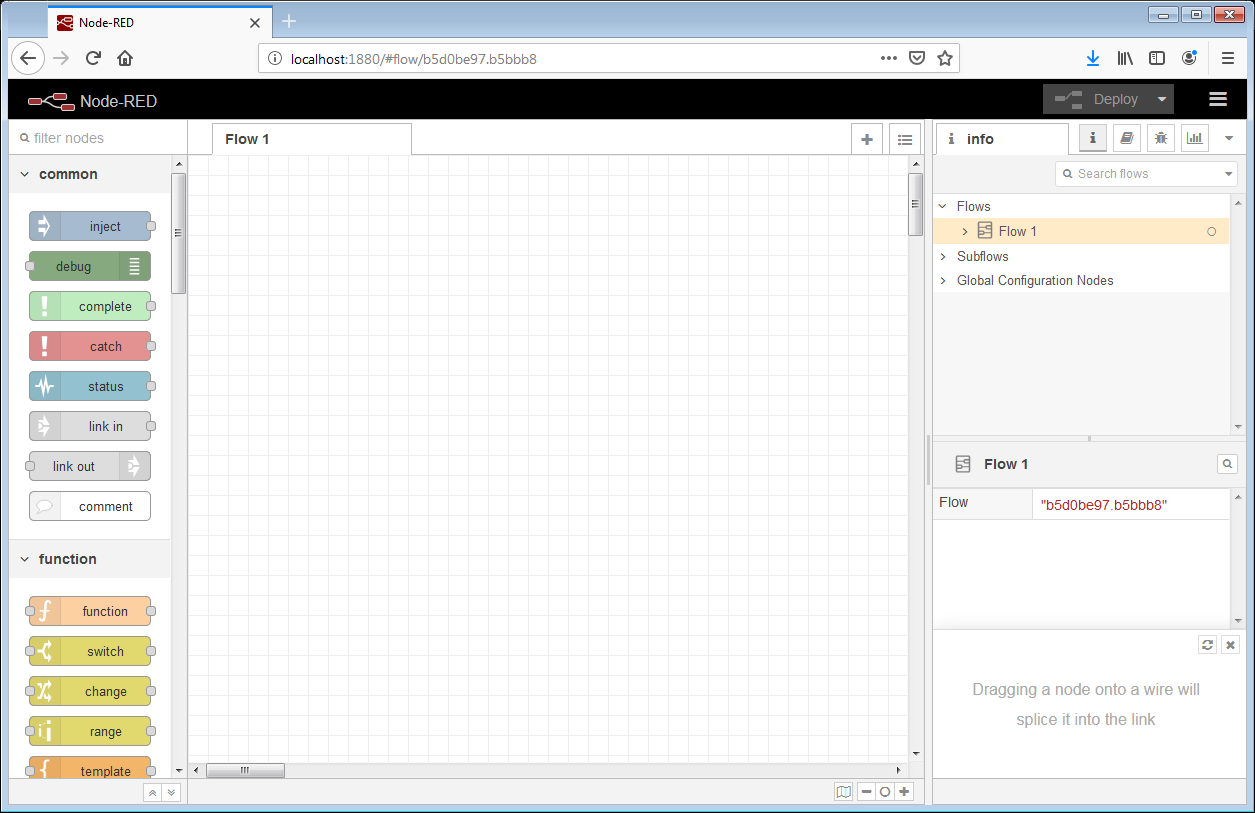 The Node-RED editor will be available at the same address if we add/ui to the end, i.e. 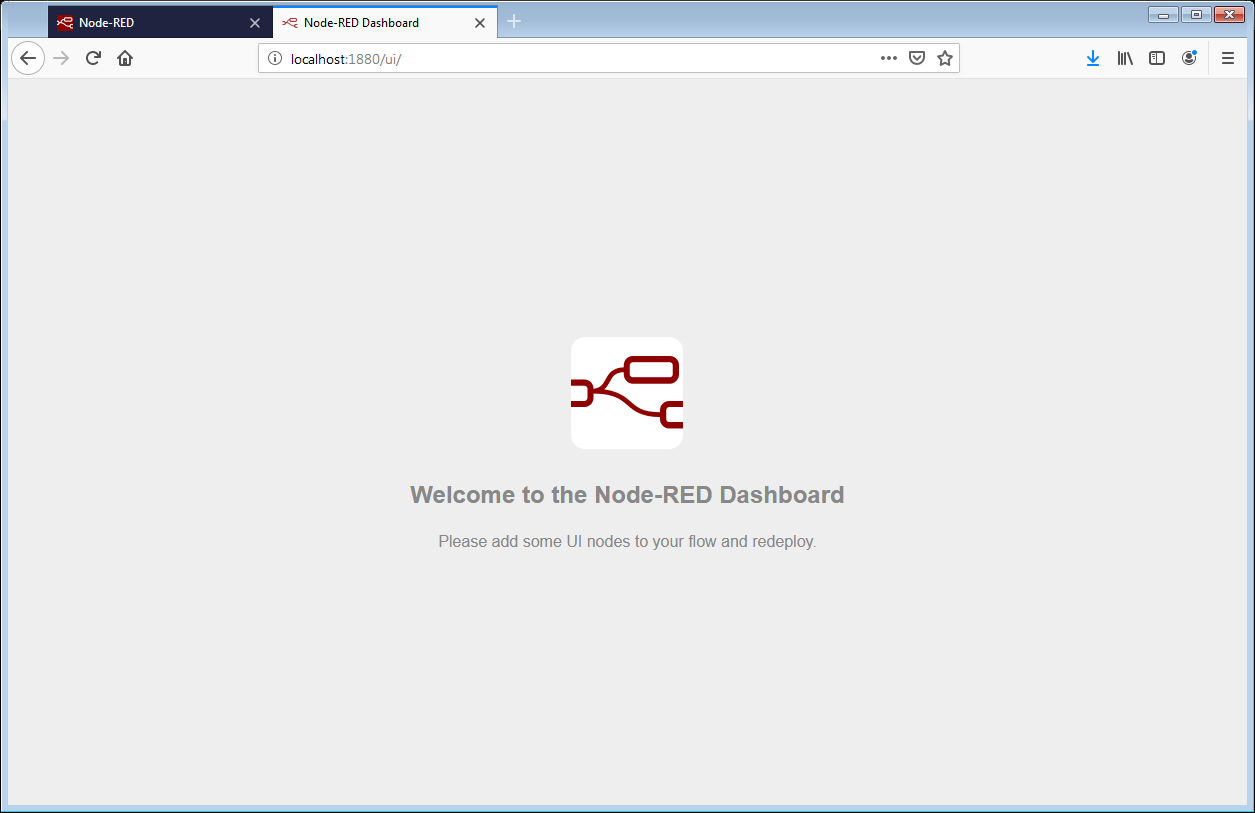 Please note that, by default, the Node-RED editor is not secured – anyone who can access its IP address can access the editor and deploy changes.

This will not be a problem as long as everything is running on local and trusted network.

For more details on how to secure Node-RED editor and dashboard visit: https://nodered.org/docs/user-guide/runtime/securing-node-red

On the Node-RED official website, projects are presented as a new way to manage flow files. Rather than treat flows as a simple pair of files, they represent everything you need to create a redistributable Node-RED application.

It is important to know that projects are backed by a Git repository, meaning all of the files are fully version controlled and allow developers to use familiar workflows to collaborate with others.

Working with projects is not enabled by default and this is possible primarily because the git is required to be installed. Information about this can be seen when starting Node-RED: 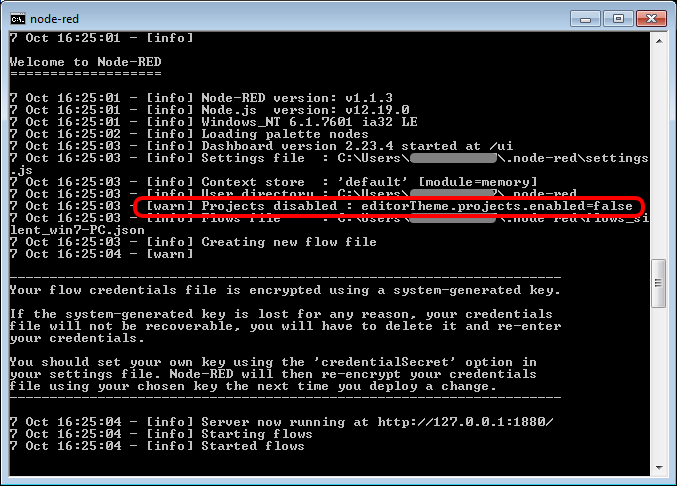 To enable projects it will be necessary to install git first. Git is also free and open source and can be downloaded from https://git-scm.com/downloads.

More information about the installation is available at https://git-scm.com/book/en/v2/Getting-Started-Installing-Git.

In the case of Windows, you will need to download the installation and run the installation wizard. In principle, you can proceed to confirm all the default options. However, there is a possibility that after installing git you will not be able to run from the command prompt (because its location is not added to the PATH environment variable). If this happens you will need to reinstall Git and select the following option in the Adjusting your PATH environment step: 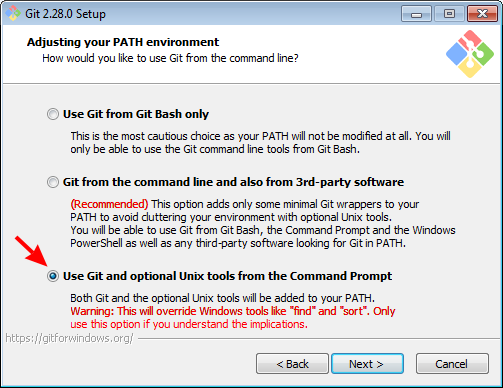 To check that the git is installed and can be run (i.e. that in the case of Windows the PATH environment variable is correctly modified) it will be enough to type in the command line:

The final step to enabling projects is to modify the Node-RED settings.js configuration file.

The location of this file on linux is in the user home folder in the .node-red subfolder. Therefore you can use the following command:

It’s similar with Windows: look for it in Users\<user name>\.Node-red

In the editorTheme:projects:enabled section within the module.exports block, it is necessary to replace false with true:

// To enable the Projects feature, set this value to true

After saving the change, run Node-RED once again and this time the following dialog will appear in the Node-RED editor (at 127.0.0.1:1880): 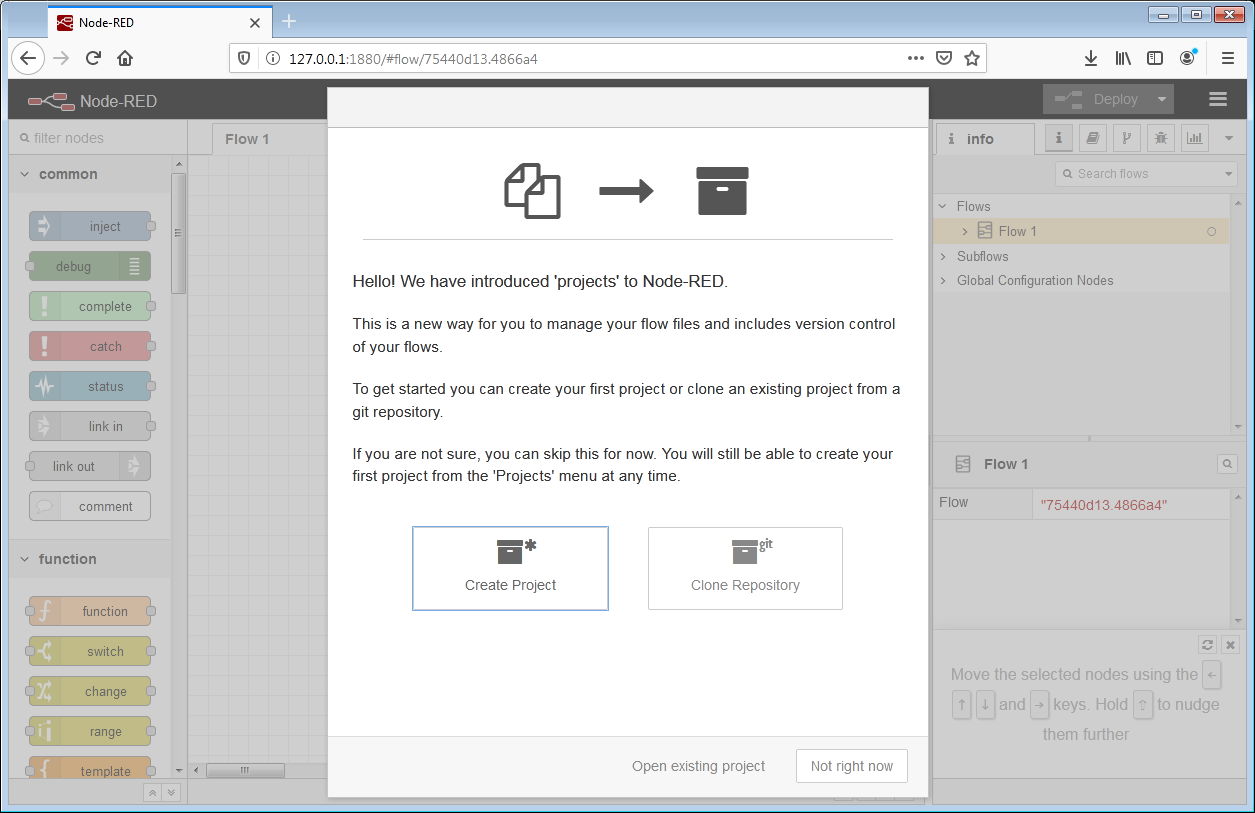 Now we can start making our test flow. Here, select the Create project option and type relay-loop-test as the project name. An empty workspace will open. The available nodes will be displayed in the list on the left. Since there are a large number of them you can use the Collapse or Expand options at the bottom left. In this case, you can get to the desired node by using the Search field at the top left.

The workspace editor allows you to work with multiple tabs and the first tab is called Flow 1. We can change its name as needed. Let’s say we change it to Main. This will require a double click on the tab name (i.e. Flow 1) when a new dialog will open and we can enter a new name.

Since Node-RED editor is a web browser application, it will not be able to right-click on any option.

The scope of this example is to test changing states of one set of relay contacts at the time. The wiring diagram is shown in Fig. 2. One output from the power module (DCP or DCM) will be used to power the relay coil. A DOUT1 output will be used to test the state change, which will be fed to the DIN1 input via the relay contact. To increase immunity to external interference on DIN1 we will use a pull-down resistor. 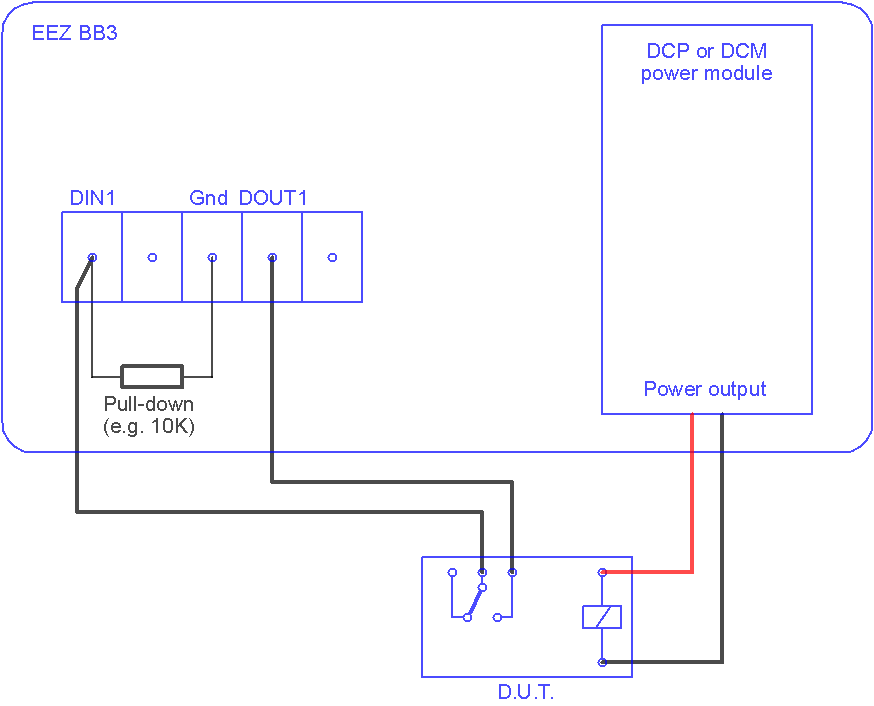 The Node-RED dashboard will be used to interact with the test flow in which we want to have the following: